Choosing a software development partner is daunting. It’s a big decision that can significantly impact your business. How do you know which company is the right fit for you? What should you look for when making your decision? This post will discuss some things to consider when choosing a development partner. Keep reading to learn more!

Bob worked from his home in New York again that evening. He's a marketing manager of a NE Lock company that manufactures intelligent security systems for homes.

NE Lock's success comes from working with local reselling and integrator partners who get the products in front of end users. This close relationship allows for quicker feedback loops that help improve product development.

The autumn of 2022 spelled trouble for enterprises; even the most popular tech giants had to dole out mass layoffs. All companies scurry to find new ways to cut costs and optimize their businesses when confronted with tough times like these.

Bob's company's partners are no different. Many of them are actively testing manufacturers from Asia to reduce costs for their clients.

Bob finally got to lead the development of a new company portal that will sell NE Lock products directly to customers. This means the company won't be dependent on resellers anymore.

Bob's primary concern was finding the ideal software development partner since NE Lock has no experience in web development.

After minutes of googling, Bob felt like he was in a supermarket. There were plenty of options to choose from—dozens of companies specializing in different business domains and mastering different technologies and platforms.

All the portfolios were good, and each company had a lot of examples to show. So Bob narrowed it down to three companies with experience in store development for consumer electronics manufacturers, one of which was even a competitor's case study.

Bob immediately booked calls with them, and soon he had three ecommerce website package proposals. All of them were less than ten thousand using a pre-made template and can be completed in under one month.

Bob was excited to present the solutions to his team.

Is ROI for software development reasonable?

The following evening, Bob was once again sitting in front of his laptop at home, feeling dejected.

The team meeting was a disaster. After Bob had presented the proposals, his boss said: "Our goal is to generate 5 million dollars per month. Are you sure you can achieve it with a system that only costs five thousand dollars?"

The thought was simple, and Bob berated himself for not thinking of it sooner. How can we hope to compete if our system is average or even precisely the same?

After a while, Bob booked three new calls and got new proposals. The approach of the vendors completely differed from templated solutions. Typically the project consists of four main phases: gathering requirements, design, development, and maintenance.

Because of working in a manufacturing company, Bob clearly understood the difference between unitary and serial production. For mass production, a significant amount of manual work was automated by creating specific rigs or even machine tools for producing one specific product. However, this approach was too expensive for unitary production, so custom products cost times more than products from an assembly line.

It was valid for software proposals, too. Proposals expect a budget from $20 to $50 thousand instead of a fixed hourly rate offered due to uncertainties in scope. The timeline was from 3 to 6 months.

Bob should work closely with designers to define the scope precisely, avoid the double job, and reduce changes.

Bob's team would spend the next few days discussing and finalizing the requirements.

How to Write Requirements for Software

Over several weeks, the NE Locks management team held meetings in their office. They knew they needed a system to handle online sales and inventory management. But as they started discussing the finer details, they quickly realized that they had different opinions about how the software should work.

Some people thought it should be simple and track inventory levels and sales data. Others thought it should complete more complex requests like creating reports and recommending products to customers. The disagreement quickly became heated, and it looked like the project might not move forward at all.

Bob knew that he needed to find a way to get everyone on the same page, so he decided to create a document that would list all of the software requirements. This way, everyone could see what was and wasn't required, and they could agree on which features were and weren't essential.

Creating the requirements document was no easy task. First, Bob had to sit down with each team member and discuss their individual needs. He also had to research the software himself to make sure that he understood all of its capabilities. Nevertheless, he felt hopeful that he would be able to put together a document that satisfied everyone.

However, after a couple of weeks, Bob had to sit down with each team member again because everyone had experienced business events that had made some of the approved requirements obsolete and revealed new ones.

Bob was sitting at home in front of his laptop, exhausted. Even though the NE Lock team had approved the final version of the requirements, he knew that the reality of business would change them again and again. How could they accurately predict the software requirements for the next six months if those needs shifted weekly?

Bob was too tired to focus, so he found himself aimlessly browsing YouTube an hour later. Another day had gone by without any progress.

A man was talking on the screen.

"Once we develop our products, once we fill that step with end users, the product gets better with the feedback. So the end user uses it, it becomes more reliable, and they tell you what to develop more."

"We worked in the field with the military together, side by side; we were not just sitting in our offices or in our factory; we moved to the field, worked with them together for years, and the products proved to be very good, and we improved them with the feedback.

And once the product proved itself in the operational field, the forward interest started coming. We started with mini80, then we moved to Bayraktar TB2 scale, and now we are doing unmanned fighter jet."

Bob was amazed that they did the same thing in NE Lock. They created a rough first draft of the product and slowly improved it based on user feedback. This is the standard procedure for developing products, from home security electronics to UAVs, from shaving razors to innovative gadgets.

Research and development costs make up a large portion of the end price of products, but they also allow companies to obtain unique competitive advantages.

"Why do we try to define all the requirements up front instead of getting user feedback?" Bob thought, "The system we want to build is no different than any other product."

He looked through the proposals again, and although there was a section labeled "maintenance," it didn't seem to have anything to do with gathering feedback.

Bob closed YouTube and googled "software product development." He had seen this term a couple of times before at different companies but never gave it much thought. "How could I miss it?" Bob muttered to himself.

"We co-create the product with you," Bob read. He booked the call. 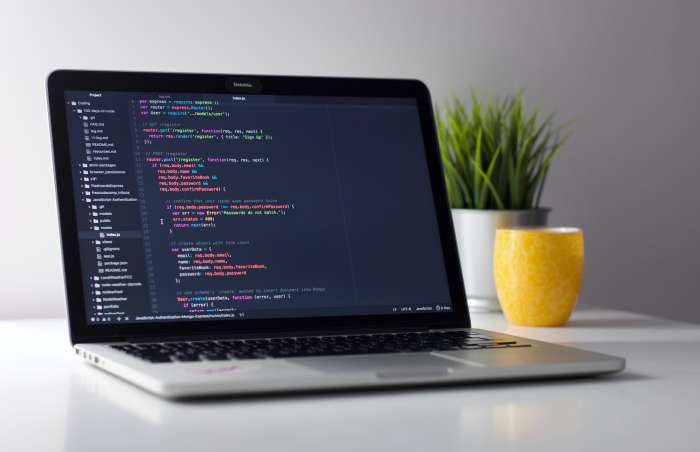 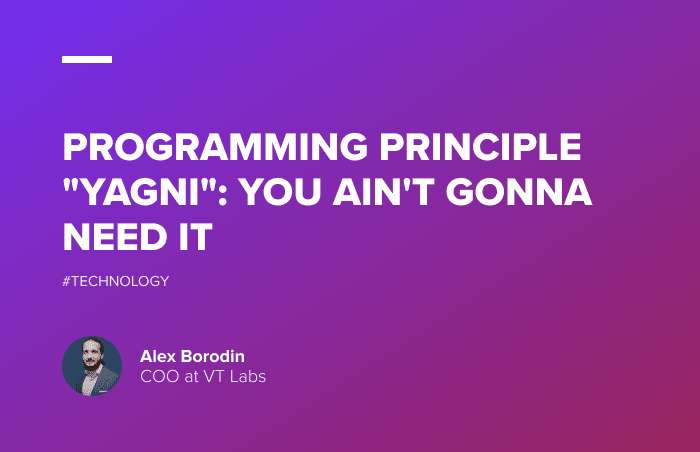 How to practice YAGNI principle (You Aren't Gonna Need It)

There's a popular extreme programming principle, YAGNI, that encourages to only build features that are absolutely necessary. It's a valuable principle to follow when building applications. In this article, we'll discuss what YAGNI is and how you can apply it in your own projects.
# Tech 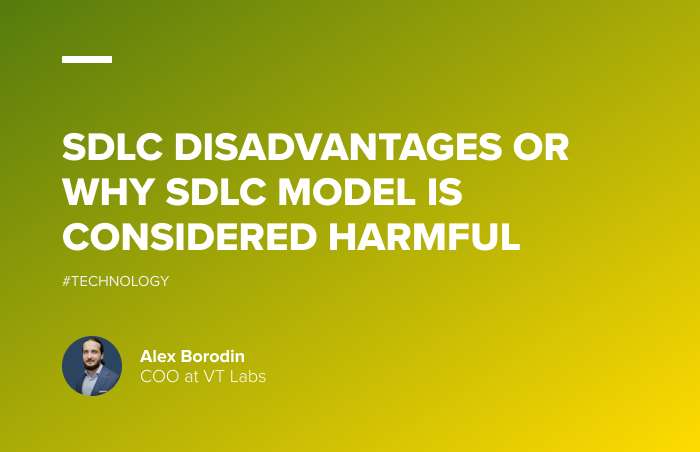 Many experts consider the software development life cycle (SDLC) methodology harmful. But why is this? What are the disadvantages of using the SDLC methodology? In this blog post, we will discuss these disadvantages and see why SDLC might not be the best choice for your next project.
# Tech

How to practice YAGNI principle (You Aren't Gonna Need It)

There's a popular extreme programming principle, YAGNI, that encourages to only build features that are absolutely necessary. It's a valuable principle to follow when building applications. In this article, we'll discuss what YAGNI is and how you can apply it in your own projects.
# Tech

Many experts consider the software development life cycle (SDLC) methodology harmful. But why is this? What are the disadvantages of using the SDLC methodology? In this blog post, we will discuss these disadvantages and see why SDLC might not be the best choice for your next project.
# Tech